So several years ago Laphroaig, one of the world's premier makers of scotch whiskey, had this offer for fans. If you filled out a survey, they sent a certificate naming you a "part-owner". It's basically a fan club for the peaty drink, but if you show up at their factory with the membership certificate in-hand you are entitled one free dram of scotch a year. I figured what the hell, signed myself up and made it a Christmas present for all the fellow scotch drinkers I knew at the time----my dad, my uncle, my grandpa, and two friends I had at work at the time.

A few years ago the company started sending small holiday gifts. We've gotten cards, tree ornaments, recipes, and a bunch of other random things loosely associated with Laphroaig. But this year they topped themselves. 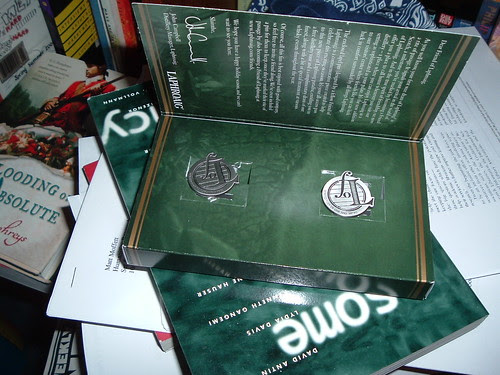 Yes, that's right. This year they sent out official Laproaig lapel pins! It's probably too small to read, but under the "L" logo it reads "Spirited Folk of Oak and Smoke". I might wear mine next time I visit my dad and see if he has his on. We'll be one big dorky family of scotch drinkers.

I can't believe how excited I am by this. I really don't care what else I get for holiday gifts this year.

Excelsior.
Posted by Hebdomeros at 10:11 AM

Hey! As cool as that is, you better care what presents you're getting. I put a lot... errr... some... errr... at least a little bit of time and effort in getting you presents. And you're going to love your birthday present. And even if you don't, well, I will. :) (this is true love, isn't it?)

Hebdomeros
"It's strange," Hebdomeros was thinking, "as for me, the very idea that something had escaped my understanding would keep me awake at nights, whereas people in general are not in the least perturbed when they see or read or hear things they find completely obscure".

Other Blogs By Cool Peeps